Why register for the Odyssey Tennis courses? 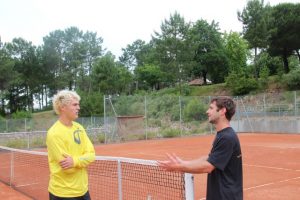 Our main coaches in charge of the tennis camps have been coaches on the professional circuit and/or at the NCAA Division I level. We are proud to provide the best possible coaches to our campers. They are all experienced, dynamic and dedicated to developing the potential of each athlete.

We have established strong relationships with surf academies, golf and other activities that complement our courses. These partnerships contribute to the general quality of the courses we offer.

We strive to empower our coaches to provide the best possible coaching. In addition to providing them with an ideal environment to express their passions, we keep our coach to player ratio as low as possible. Indeed, unlike the typical summer camp which often groups up to 10 campers per field, we work with a maximum of 4-6 players per field and per coach. Such a low ratio allows players to maximize their practice time and enables our coaches to provide individual, personalized feedback. 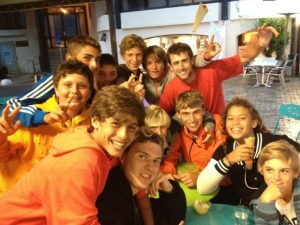 The trainees evolve in a calm, secure and fun environment in the middle of the Landes forest and near the beach and the lake of Port d’Albret.

Odyssey Tennis campers are in constant interaction with other tennis players. Players quickly develop strong friendships that allow them to quickly feel more comfortable and fully express their game on the court.

In such a friendly environment, coaches also develop a strong bond and campers get in on it as they cheer each other on during games and create an uplifting and competitive atmosphere akin to college tennis matches.

During their free time, the trainees have the opportunity to go to the beach, to the swimming pool, to go for bike rides, or to play table tennis, volleyball, beach tennis and card games. In the evening, campers also have the option of visiting the town center of Vieux-Boucau, eating ice cream or taking a walk along Port d’Albret lake, all under adult supervision. 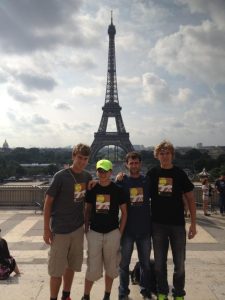 The South West region is very rich in history, and the trainees have the opportunity to visit part of it. We also strive to make them discover and understand the culture specific to France, and more particularly the Landes and the Basque Country. For example, we take them to shows in arenas that are unique in the world (Landes races, cows, etc.).

The trainees will have the opportunity to discover and taste some of the best specialties of France and more particularly of the Landes and Basque regions.

The South West of France has a lot to offer and the magnificent landscapes of the Landes and the Basque Country are always a big summer attraction for both French citizens and international tourists.

The Landes forest is mainly made up of tall pines and cycle paths where runners, walkers and cyclists can also enjoy an invigorating workout.

In addition, Odyssey Tennis campers will discover the natural heritage and the different landscapes of the southwestern region of the French Atlantic, such as the Atlantic Ocean, beaches and dunes, as well as pine forests, vast lakes and the mountains of the Pyrenees (an hour’s drive south). Sports Campus is also located an hour’s drive from Spain. 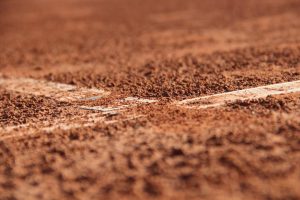 We also confront young players with another culture of tennis thanks to some training on red clay. In 2013, of the top 100 ATP players, more than 25 came from Spain or France. One of the objectives of this camp is to confront young American players as soon as possible with European players who have another tennis culture, and often another style of play. This first experience will be of great benefit to them in the long run as, sooner or later, they will all have to face these players on the professional circuit or in college.

Another finding is that most high-level players were brought up on clay. The global success of these players shows that the game patterns developed on clay are also very effective on hard courts or even on grass. Trainees will have the opportunity to train on red clay. 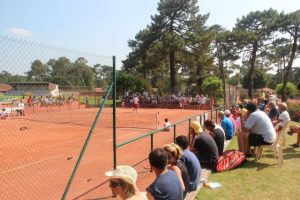 Odyssey Tennis Academy’s competitive advantage is based on the nature of the service we provide.

Most coaches would agree that the complexity of tennis requires players to play a significant number of tournaments (probably more than in any other sport) in order to become effective and competitive. We also believe that to be able to play at the college level, kids need to start competing early and on a regular basis. If they don’t, it will surely create a deficit which is not impossible but difficult to recover in the future.

Generally speaking, we can observe that children in the United States do not play enough tournaments compared to their European counterparts. Such a fact can explain part of the gap that exists today between the levels of European and American tennis.

The majority of organizations offering tennis camps for young Americans focus solely on training and conditioning inside the camp. In most cases, players end up playing each other during camp, and not having the opportunity to do what would really take them to the next : play official matches against players from other cultures, and on different terrains.

While the amount of practice, instruction and conditioning time is important to us, our primary focus is on getting campers into tournament play. Indeed, we believe that the cultural experience of tennis only really exists if we allow them to compete (in an official format) against players from other countries. In our camp, children have the opportunity to participate in many tournaments.

Most players will play an average of one game per day, which in three weeks is around 20 games. Some USTA-level kids don’t even play that many games in a season, while most struggle to play that many per semester! We can just imagine the benefits it would bring to these young players